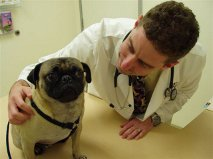 Be very careful when using analgesics. Common painkillers that people use, including acetaminophen (Tylenol), Ibuprofen (Advil), naproxen (Aleve), and salicylic acid (aspirin), can be very toxic, even lethal, for animals. That’s not to say that analgesics such as these can’t be used on your pets, but they must be administered under professional veterinary guidance.

The most widely used homeopathic pain reliever is Arnica.  Others include Curcumin,  which is best taken with Bromelain,  and Ruta.