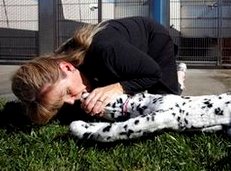 Check to see if your pet is breathing. Do this by gentling tapping the animal and calling its name. Then lean in close and look, listen, and feel for breathing. If there is no breathing:

Some holistic veterinarians recommend giving one dose of Carbo vegetabilis 30c  by placing a few pellets on the tongue and putting drops of water on them before the resuscitations, but usually you won’t have time for this unless you happen to have them handy.

Remember the ABCs – Airway, Breathing, Circulation. Start by clearing the airway and checking for obstructions. Pull the tongue a little, close the mouth and give two breaths into the nostrils, as described above. Then begin CPR.

For medium and large dogs, place the animal on its side with the left side up. 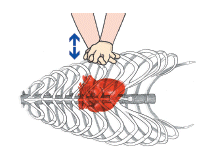 Depending on the animal’s size, use one or both hands to cover the heart area, which is directly behind the elbow, as shown in the picture of the black dog. Lock your elbows, and push down with the heel of one hand. If using two hands, the second hand covers the first. Pump hard and fast at a rate of once per second, but not hard enough to break the ribs. 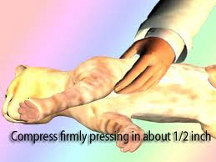 For cats or really small dogs, use one hand in a squeezing motion right below the shoulder blades, with your four fingers on the left side of the animal, and your thumb on the right. The idea is to keep the heart pushing blood around until consciousness recurs and the brain takes over again.

Alternate sets of heart pumps with mouth-to-nose breaths according to the schedule below.

If there are two of you, one starts with the breaths, and then stops while the other does the heart pumps. Make sure somebody calls an emergency veterinarian, if possible.

There are acupressure points for the heart in the center of the largest pad on the paw, and in between the nostrils. We are not experts in this field, however, so you may want to refer to another source if you are interested in learning more about acupressure techniques. If an animal has collapsed, and there is an extra person around, it can’t hurt to have that person applying strong and pinpointed pressure to these points, or at least the one on the paw pad, while the others are performing the breaths and heart pumps. But your primary goal should be to get to a veterinarian.