First and foremost, don’t freak out. Panicking hinders your ability to perform necessary, life-saving steps, and it also further scares an animal that is already terrified and confused. Approach calmly, talk softly, and don’t make sudden or jerky movements. You may want to check to see if the animal will bite by extending a closed hand, knuckles upward. If it’s a dog, and it tries to bite you, put on some sort of muzzle, if possible.

Try not to move the animal’s spine or change its position, but move it out of harm’s way, if necessary. The best thing you can do is to slide the animal onto a board and transport it this way, with as little change in movement as possible, to the nearest veterinarian. If you don’t have a board, use a towel or blanket stretched as tautly as possible.

Be aware that an injured animal is scared and in pain, and is therefore apt to possibly snap out and bite in fear and panic. Its first instinct is to run and hide, and it may not recognize you or understand you’re trying to help.

Give Arnica montana 30c  either by placing a few pellets on the tongue every five minutes for a total of three doses. Alternatively, dissolve the pellets in a little water and administer drops onto the tongue using an eyedropper, plastic or rubber syringe, or any other method that works.

Check for breathing. If the animal isn’t breathing, use the mouth-to-nose respiration technique described in the Artificial Resuscitation section. 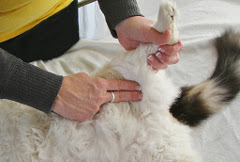 Check for a pulse. The best place to find the pulse is on the inside of the rear leg, towards the top of the leg. This is called the Femoral Pulse. An alternative pulse point is on the outside of the left front leg, just behind the shoulder. This is called the Apical Pulse. Even though you don’t want to cause further injuries by moving the animal, if it has no pulse, CPR takes precedence.

Check for profuse bleeding. Use gauze or bandages, if you have them, to stop hemorrhaging. See Bleeding for more information.

If a leg is obviously broken, taping or tying a splint can prevent a compound fracture where the bone breaks through the skin. Your main goal, however,  is to get the animal to a veterinarian as soon as possible. Do not attempt to reset the bone. Any straight, firm object can suffice as an emerg

ency splint as long as it extends past the injured joint, immobilizing the joints above and below the injury. Tape or tie the splint into place so that it is secure, but not so tight that it cuts off circulation.

Watch for signs of shock, which is actually the collapse of the circulatory system. Shock occurs when an animal has sustained a traumatic injury such as blood loss, electric shock, poisoning, burns or another serious accident. If not treated promptly, shock may progress to death.

Symptoms of shock include the following:

Shock requires immediate veterinary attention. Make sure the animal’s air passages are clear. Help the animal maintain body heat by covering it with a coat or blanket. If the animal is unconscious, keep the animal’s head lower than its body. Massage the legs and body muscles to encourage blood flow. If possible, phone the veterinary hospital to let them know the problem and that you are on your way. Transport the animal with as little movement as possible, and try to keep the it warm and secure as you transport it to a veterinarian.